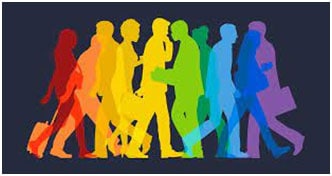 The UN SDG Reducing Inequalities stands for ensuring equal opportunity and treatment for all. Here, in the Sancta Marian community, we believe in applying these UN SDGs in our own lives to bring good change.

Hoping to make a difference, a group of 4 students will be collecting personal stories from those who face or have faced discrimination, which will be published each month in order to raise awareness on how the victim felt, how they dealt with it, and how it can be prevented in the future.

Read the first story brought to you by this team, featuring an anonymous person who expresses their journey in coming out as part of the LGBTQ+ community to their peers.

I came out as part of the LGBTQA+ community for about 4 years now. I basically always knew I didn’t fit in with other people by gender. I wore clothes that even my parents said were for “boys” and I was into activities that were deemed “not for my gender”. On top of that, I grew up in an environment that led me to believe that being homosexual was wrong. I thought the word “gay” was a swear and an insult. After growing as a person and being exposed to more of the outside world, I learned that it was completely normal.

By the 7th grade, I was 100% sure that I was bisexual, but I wasn’t too open about it. After telling a few of my close friends, only when they asked, the entire grade found out, and I was given titles like “bisexual cow” and “illegal alien”. They didn’t get to me that much, but as a 12-year-old, it definitely mattered to me.

The following year, I had changed schools, and of course didn’t tell anyone, even when asked about my sexuality. But a few months in, my friends began joking around about how I was “lesbian” for my personality. This was all fun and jokes, but it was obviously hard to hide my personality.

9th grade passed by quite quickly and in 10th grade, I finally had the courage to say it out loud, because in 10th grade I had a best friend that loved me very much and I even saw some of my classmates actively supporting the community during pride month, and so I was no longer afraid of my identity. I told a couple of my friends that I trusted and then eventually became open about it. If someone brought it up or asked, I would be honest.

At first, people started sympathizing with me and saying things like “don’t be ashamed” and “I’ve always wanted a gay best friend”. However nice these comments may seem, I had no intentions of being ashamed, and being friends with someone based on their sexuality is not right. But by now, I appreciate how people have stopped paying attention to it, now and then I get a few questions and I’m always happy to answer questions (just not rude ones)!

I also learned that I’m not BI but Pan which is something I discovered recently. When I used the word pan it confused people. Of course, yes, it’s new and confusing but some people said it’s not a real thing and that it’s the same thing as BI, which it’s not. These kinds of comments make you feel irrelevant. Now my sexuality is a very small part of me, and the people around me have learned to accept it and stopped paying it so much attention, which I appreciate.

We hope that you could take away from this story that name calling and asking offensive, personal questions about one’s gender is not right. And no matter the gender, we are all humans at the end of the day, and its only right to ensure that we are all treated the same way.

Thank you for taking the time to read through this inspiring story of a student who portrayed determination and courage. Stay tuned to this page for more enlightening stories!